So I predicted the game to go 31-7 in BYU’s favor.  I got the UNLV part right, and I also was right that this would be the Cougars’ best offensive output so far this year.  I was just a touch light on the number of touchdowns BYU would score.  The Cougars had scored 23, 24, and 25 points in their wins this season, in that order, with point totals in losses having totals less or much less than those.  I was excited to finally see a breakout game from the offense to go along with what has lately been a dominating defense.  Here is how the Cougars fared in the aspects of the game I highlighted as keys for success. 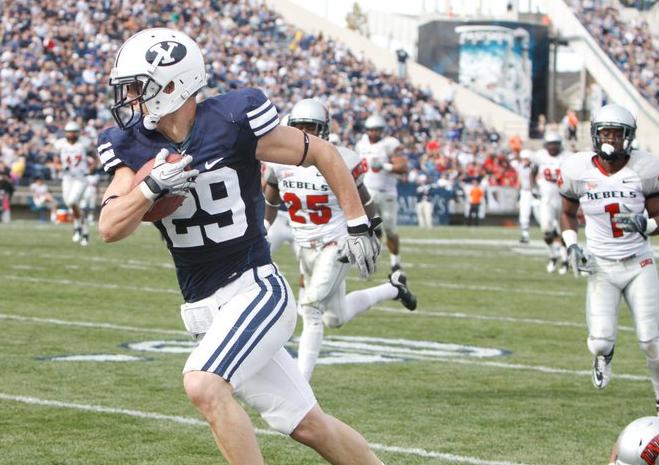 How *not* to play defense.

Jake Heaps and the Receivers. Whether it was a poor UNLV defense, incremental improvements, or having the bye week for extra practice, Heaps got it done on Saturday, posting career highs for passing yards (294), and passing touchdowns (2).  He also averaged nearly 15.5 yards per completion.  Luke Ashworth caught 5 passes for 83 yards, and McKay Jacobson caught 4 for 70 yards.  Heaps was on directly on target nearly all game, and ended with a respectable 19/31 attempts.  There is definitely room for improvement, but It’s nice to see the team, in Bronco’s words, ‘incrementally’ getting better.

Special Teams. The problem with a good defense is that it limits the number of KR opportunities you get.  Cody Hoffman returned a kickoff for 50 yards, but I think Mitch Payne had the best day on special teams, going 2/2 on field goal attempts, including a 48 yarder.  He was also 7/7 on PAT’s.  Yeah, 7.  Awesome day for the offense.

The Rush Attack. BYU continues to be dominant in the run game – with more than 200 yards put up against UNLV, with DiLuigi and Quezada leading the way with 80 and 65 yards, respectively.  Quezada also accounted for 3 of BYU’s 5 rushing touchdowns on the day.

It’s all about the D. Yet again, the Bronco Defense was dominant, holding the Rebels to a mere 22 rushing yards and 122 passing yards.  About half of their total yards came on their fourth quarter scoring drive, when BYU’s first team defense was on the sideline.  So the starting D held UNLV to about 70 yards of offense.  Stellar performance.

What we know about UNLV

UNLV is (1-8), and next week will face (2-8) Wyoming, who is winless in MWC play this year.  If the Rebels are going to win another game, it may have to come here, as their other remaining games are against Air Force, San Diego State, and Hawaii.

What we know about BYU

BYU is now (4-5), having won three of its last four games (the loss coming against TCU) since Bronco took over as Defensive Coordinator.   The Cougars must win two of their final three games to become bowl eligible.   Bronco declared that he expects the Cougars can win each of their next three games, at Colorado State, against New Mexico, and at Utah.  Thanks to BYU and Utah’s play last weekend, that scenario is more believable than ever.