As expected, the Cougars decimated Idaho State, in a way that said, “we are an FBS team, and you are not.” The Cougars held the Bengals to just a single field goal, while tallying 8 touchdowns of their own: four rushing, three receiving, and one on defense. It was by far BYU’s best offensive and defensive performance of the season. It did come against a weak opponent, but the Cougars did everything they were expected to. 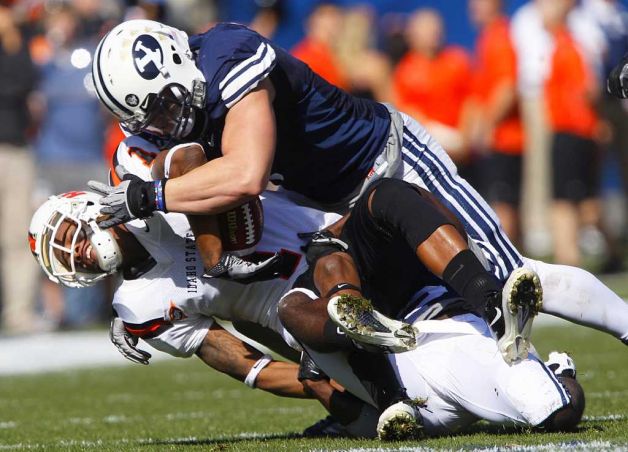 Pendleton and Eason combine for a tackle

Keys to the game

All the Cougars had to do was show up, and they did. The defense tallied three interceptions (one for a touchdown), held Idaho State to just 5/18 on third down, and allowed just 20 yards on 19 rushing attempts. They doubled their season sack total by reaching the quarterback six times. Offensively, the Cougars racked up more than 500 yards, with Nelson throwing for 215, and the team rushing for 290. Hoffman and Apo each had 5 receptions for 71 yards – Hoffman had 2 TD receptions, and Apo had one.

Idaho State got what they expected from this weekend: a six-figure paycheck. They have a couple of talented kids, and a coach who obviously cares about them and the program. It shouldn’t be hard to recruit a QB and WR’s to a program that is so dedicated to the passing game. I think they will likely see improvement over the next few years, but they certainly have a long way to go. Next week they continue in Big Sky Conference play as they will take on Montana State (7-1), which will likely lead to their sixth straight loss, as Montana State’s one loss came at the hands of Pac 12 Utah.

The Cougars are now (Armed Forces) Bowl eligible, and riding a 5 game winning streak, since starting the season 1-2. Certainly the streak has been partly due to a change in difficulty, but there has also been a change of quarterback and a change of identity. This team is not the same one that lost to Utah 54-10. They are peaking at the right time, too, as they have a big game against TCU this week down at Cowboy’s Stadium in Dallas. This will be the perfect stage for the Cougars of 2011 to declare who they are.