BYU comeback ends with a doink

It wasn’t a pretty game for either team, but the Utes got the better of us for the third straight year. While this game certainly doesn’t have the sting of 54-10, it’s never a good feeling to lose to your rival. Utah and BYU played a tense first half, both teams were just waiting for the first big mistake. Near misses abounded for the Cougars early on, but things didn’t really fall apart until the third quarter. Two Cougar turnovers netted the Utes 10 points, and the Utah got another quick TD on a pass that went over BYU’s secondary. 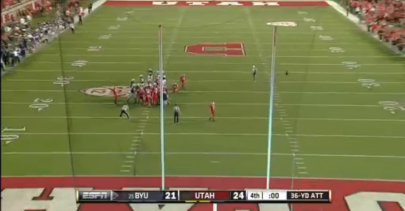 Unlike last year, BYU did not give up, but came rallying back in the 4th quarter. Kyle Van Noy recorded a monster sack on third down to get the Cougars one last chance at the ball. Riley Nelson completed a long pass to Cody Hoffman to dig out of a 4th and 12 hole. Riley spiked the ball to stop the clock and threw up an errant pass that came down, apparently after time had expired.

Time had not expired however, and one second was put back on the clock.

The Cougars lined up for a 51 yard field goal, which was completely and totally blocked.

That the ball was live, and JD Falslev had picked it up and began to advance it, before being tackled. The referee flagged the crowd for entering the field during the live play,

and penalized the Utes 15 yards and gave BYU a free play (as time had expired). Now having tried Sorensen (he having failed), the Cougars went with Riley Stephenson for the 36 yard attempt, which looked good, until it doinked off the left goal post.

[Enter Ute fans for the third and final time].

I had picked the Cougars to win it, 31-24, so I wasn’t terribly far off of the final score, as the Utes took the game, 24-21. If BYU had made the final field goal and scored a TD to win it in overtime, I could have been right, and this would be a much happier post to write. Here’s a look at what went wrong, and right, for the Cougars.

Riley Juice. The juice was certainly not loose this game, though the Cougars did have greater offensive success than the Utes, tallying 312 yards to Utah’s 245, and 21 points to Utah’s 17 (the Utah defense scored one touchdown). The Cougars even had a better third down conversion percentage (35) than Utah (25), but that was just as bad a number as last year. Cody Hoffman was the bright spot in the offense again, with 8 receptions for 120 yards and a touchdown. Friel continued to be productive as well, hauling in 5 passes for 64 yards and a TD. Riley threw both TDs, but also threw an INT that Utah eventually converted to a field goal. Riley also was part of a longsnap debacle, in which the center thought he was calling for the ball when in fact he was changing the play. The ball sailed past Riley, and neither he nor Falslev could fall on the ball, which was scooped up by Utah and returned for a touchdown. Blech.

The Rush Attack. Again, this unit did better than last year, outperformed Utah this year, and still the Cougars came up short. It was runningback by committee again, with Alisa leading the way on 15 carries for 56 yards. Nelson had 14 carries for 34 yards, and Williams added 8 carries for 30 yards and a touchdown. The average of 2.5 yards per carry was meager, but Utah managed only 1.4 ypc for 49 yards.

Special Teams. The Cougars were full of highs and lows in the special teams department…shall I begin to say, as usual? The return game featured some exciting returns, most notably, the 34 yard punt return by JD Falslev that was perhaps one defender away from breaking free for the endzone. The Cougars also denied the Utes a punt attempt, as several defenders reached Utah’s Sean Sellwood on one occasion, and he was unable to kick at all. This resulted in the Cougars taking over at the Utah 14 yard line, and the Friel TD.

Bronco D. If you want a truly bright spot for the Cougars, it was their defense. Some of the numbers we’ve already looked at, as they held the Utes to: 25% 3rd down conversion, 245 total yards, 49 rushing yards, and 1.4 yards per rushing attempt. The defense tallied four sacks against the Utes, and got to Utah’s Jon Hays multiple times in the first half. The only really awful play for me was the 39 yard touchdown pass near the end of the third quarter. It was a one play drive where Dres Anderson simply outran the Cougar secondary, and Hays found him easily.

Regardless of how the rest of the season goes, beating your rival goes a long way to being happy with your team in a given year. The Utes open up their Pac12 conference play as they head on the road next week to face Arizona State, and then have 12 days to prepare for a tough USC team. They can take comfort in the fact that they came out ahead of BYU after dropping the OT decision to Utah State a week earlier, but the Utes should be worried about how close they came to blowing a 17 point 4th quarter lead.

BYU can feel good about not quitting. In the third quarter, it appeared that we were heading into another game like last year’s, but the Cougars battled back this time. Perhaps with another 10 seconds or so (or maybe 3 inches to the right), the game might’ve turned out in their favor. Where the Cougars should be worried is that their offense looked confused and frustrated for much of the Utah game. They apparently had no idea how to cope with the hostile environment at Rice Eccles Stadium. They’ll have a short week to prepare for a tough Boise State team on Thursday, but I do hope they run something in practice to prepare for that. The Cougars were on the short end of 5 separate plays, which if they had executed any of them, they’d have won or tied the game. But Utah outdid them on each one. Kudos to the Cougars for being that close though, because there were a handful of plays also that had Utah executed, they could have put the game out of reach.

This rivalry game is a tough one, and the difference between winning and losing is often a razor’s edge. Credit the Utes for doing just enough to win the game.