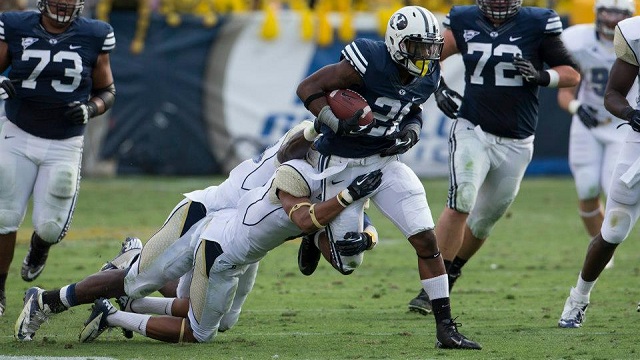 Coming into the Georgia Tech game I wondered if BYU would experience a letdown. They had just come off of back to back match-ups with top 10 teams, and being a 4-4 BYU who could have had 2 or 3 more wins on the year–they had all of the excuses in place for a let down game right? I mean after the media and a lot of fans had said the season was over, and there was nothing left to play for. How would BYU react? Would they feel sorry for themselves and come out flat? Would they stand up and fight?

BYU answered my question with a resounding 41-17 victory. The Cougars overcame two non-offensive touchdowns by Georgia Tech–a 22 yard interception return and a 97 yard kickoff return–to win by a 24 point margin. Defensive and special teams scores often make the difference in the game and can break open an otherwise close game (see Utah vs Cal). The BYU defense only allowed 157 yards of total offense and 3 points. They also held the Yellow Jackets to zero 3rd down conversions on ten tries (my stat of the game). In contrast, BYU gained 411 yards, 228 passing and 183 rushing. The Cougars succeeded on 9 of 16 3rd down attempts. BYU dominated the time of possession 38:59 to 21:01. And the starting field position was in BYU’s favor with the scoring drives of 55, 58, 21, 42, 2, 43, and 40.

BYU’s offense was highlighted by a 4 touchdown performance by Jamaal Williams. He scored the game’s first points on a 6 yard run and then broke a tie in the 2nd quarter on a 1 yard TD run making it 14-7. He added another 1 yard TD run in the 3rd and scored on a 39 yard catch-and-run in the 4th to score the last touchdown of the game. Jamaal Williams gave Cougar fans plenty to look forward to with his player of the game performance, adding 107 yards rushing and 54 yards receiving to his 4 touchdowns.

The much maligned Riley Nelson had his best game since Weber State. He came back from a first quarter pick six to complete 19 of 28 for 204 yards and 1 touchdown. He also scored his first rushing touchdown of the season on a 10 yard run in the third quarter and finished with 17 rushing yards on the game.

Justin Sorensen added two field goals to get BYU to 41 and finished 2/3 on the day, making it the best kicking game of the season for the Cougars.

At the end of the game BYU had done something that they have failed to do in all of their losses–score points. Starting field position and a bad Yellow Jacket defense (Georgia Tech ranks 80th in scoring defense and 74th in total defense) contributed to their successes. This was a road win versus a BCS school. For a BYU team searching for answers it was exactly what they needed.