Don’t call for a Cougar comeback 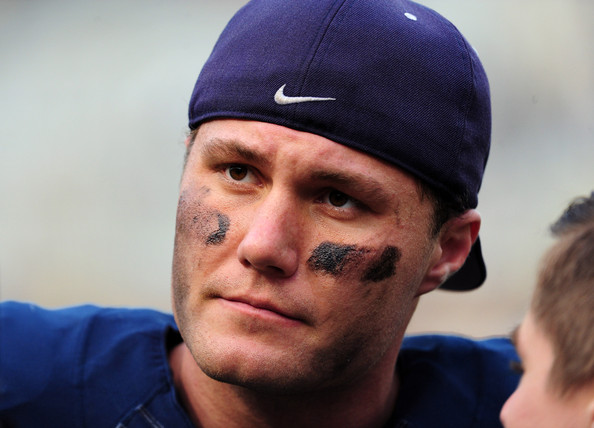 Don’t call for a Cougar comeback, one hasn’t happened this year. BYU’s 2 minute drill ain’t putting opponents in fear. BYU can’t knock you out, (when it comes to game winning drives that is).

BYU currently stands at a disappointing 7-5 for the 2012 season. There has been a lot of talk about the reasons for their under performing season. It really boils down to this. BYU is 0 for 4 on attempted game winning drives. In games decided by one score BYU is 1-4. And BYU has been ahead, tied or within one score in the 4th quarter in all five losses.

The question is why has BYU been unable to win the close games? And more specifically why have they been unable to score on potential game winning drives?

In 2011 BYU finished the season with a 10-3 record and were ranked 25th in the end of the year USA Today Coaches Poll. The 10 wins achieved in 2011 may not have satisfied all followers of Cougar football. But they did win 10 games. Those ten wins were made possible by a 4-1 record in games decided by one score or less.

BYU 14, Ole Miss 13: BYU Trailed 13-0 in the 4th quarter. Jake Heaps 19 yard touchdown pass to Ross Apo made it 13-7. Then Kyle Van Noy had a strip-sack-fumble recovery touchdown for the game winning score.

Texas 17, BYU 16: BYU led 16-10 in the 4th quarter but surrendered a touchdown with just over 8 minutes left that was the difference in this loss. A Jake Heaps pass was intercepted on BYU’s last possession.

BYU 24, UCF 17: The special teams unit helped the Cougars pull out this win. Cody Hoffman’s 93 yard kickoff return for a touchdown tied the game at 17 in the 3rd quarter. BYU recovered a muffed punt and Bryan Kariya ran in the winning touchdown from 6 yards out to break the tie and decide the game.

BYU 27, Utah State 24: Trailing 24-13 in the 4th quarter, Riley Nelson (who replaced ineffective starter Jake Heaps) hit Cody Hoffman for a 24 yard touchdown pass making in 24-20. Marcus Mathews caught a tipped ball in the end zone for the game winning touchdown from 13 yards out with only 11 seconds remaining in the game. The touchdown capped a 9 play 96 yard drive game winning drive.

BYU 24, Tulsa 21: BYU gained possession of the ball at the Tulsa 48 yard line trailing 21-17 with 4:18 left on the clock. Riley Nelson connected with Cody Hoffman for a 2 yard touchdown pass with 11 seconds remaining for the game winning score.

BYU did leave one winnable game on the table with the 17-16 loss to Texas. But they managed to win 4 out of 5 games that were decided in the 4th quarter. Those 4 games were the difference between a good season and a disappointing season.

This area accounted for one 4th quarter victory in 2011 vs UCF. In 2012 BYU lost to Utah 24-21. The special teams sacked the punter setting up the offense on a short field for a touchdown that brought them within 3 at 24-21. But the special teams missed 2 field goal tries at the end of the game that could have sent the game into overtime.

In 2012 BYU has sported a top 10 defense in nearly every category. In losses of 3, 1, 3 and 6 points BYU had opportunities to win games with one more score. The defense failed to produce one score in the 4th quarter to win a close game, like they did in 2011.

In 2011 Riley Nelson led two game winning drives. He was not the starter in the close loss to Texas or in the 4th quarter wins over Ole Miss and UCF. Riley was 2 for 2 in game winning drive opportunities in 2011. In 2012 the close games with Riley under center all came up short.

Riley coughed up 5 turnovers vs Boise State including a pick 6 that lost the game.

Against Oregon State BYU entered the 4th quarter tied 21-21. In their four 4th quarter possessions they had 1 punt, 1 field goal, and 2 interceptions, including a pick 6. That resulted in a 42-24 loss.

Against Notre Dame BYU took possession of the ball trailing 17-14. Riley drove the offense down the field only to stall out at the Notre Dame 34 yard line and punt. He threw to a spot when he had a wide open Cody Hoffman streaking down the field for a potential touchdown.

In the San Jose State game BYU trailed 20-7 in the 4th quarter. BYU only score 7 points in 4 possessions. BYU drove to the Spartan 24 yard line and Riley threw an interception. BYU then drove the ball to the Spartan 6 yard line where they turned the ball over on downs after three straight incomplete passes to the end zone. Riley did convert a 4th and 10 with a 20 yard touchdown pass to David Foote. BYU then recovered an onside kick and drove to the Spartan 21 yard line when Riley was sacked and fumbled the ball and San Jose State recovered it, ending the game.

This is one area that may go unnoticed when things go well, but gets heavily criticized for bad decision making when things take a turn for the worse as is the case for the 2012 football season. Game decisions and management have to be questioned this season. I am not going to propose solutions, I am simply going to point out a few questionable coaching decisions.

The quarterback position is an area that the coaches have mismanaged this year. BYU felt confident in Riley Nelson coming into this year. He helped salvage the 2011 season and finished ranked number 16 nationally in passing efficiency at 153. In the 2nd game of the 2012 season vs Weber State Riley Nelson sustained an injury to his back. In the Utah game he was visibly different, he acted and moved like something was wrong. It became worse vs Boise State where he was benched and replaced by Taysom Hill. In 2012 Riley’s efficiency rating dropped to 120 good for 85th in the country.

Hill almost led a comeback vs Boise State. He ran in for what should have been a game tying score. But BYU attempted a 2 point conversion and missed it and thus lost the game 7-6. Most observers questioned why would you attempt a 2 point conversion in that situation. You have not allowed an offensive score all game so play for overtime. But BYU coaches stuck to their pre-game decision to go for the win. They also failed to acknowledge a poor decision after the game.

Against Utah State Hill ran a play instead of taking a knee. He got hit on the play and sustained a season ending injury. This again is a coaching mistake. If the quarterback is running the wrong play and formation call a timeout. Then get the right play personnel and formation.

After the Hill injury instead of turning to seemingly capable 3rd string senior James Lark, the decision was made to go back to Riley Nelson. His injury had improved but he was not 100%. BYU then finished the season 3-3 in Nelsons last 6 starts.

James Lark did not help the Coaches and their questionable handling of the quarterback situation. Lark may have played against the worst FBS team in the country, but in his one start he had a better game than Riley Nelson, Taysom Hill, or Jake Heaps ever had in a Cougar uniform. And those other quarterbacks played against awful competition as well. If Lark could have kept the turnovers to a minimum and score 21 or more points per game then BYU could have had an 11-1 season. Riley may have given BYU a better chance to win than Lark, but we will never know, and that is why it is a questionable decision.

Another knock against the coaches is their communication with the media and with the fans. At some point coaches speak does not give people what they want to hear. Failure to meet expectations will result in criticism and failure to own up to potential mistakes or shortcomings will result in criticism. I would diagnose this as Bronco Mendenhall’s biggest problem since becoming the head coach. It is doubtful that he will ever change how he deals with the media and fans. As long as the team puts a successful product on the field he should be ok but 1-4 in games decided by one score is not a successful season.

So just as the BYU football team cannot claim any comebacks in 2012. They may not be able to count on their head coach coming back for 2013. With news that Bronco has interviewed for the Colorado job there is increasing speculation that he will not be back next year. Whether it is Bronco or a new head coach in order to be a success the 2013 Cougar football team needs to figure a way to come back and knock some opponents out.