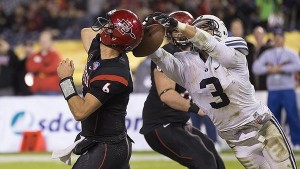 Throughout his career in Provo, Kyle Van Noy has proven himself time and time again both on the field and off the field. Van Noy’s career got off to a rocky start when he sat out the 2009 season after an Honor Code violation. Rather than leave school, Van Noy apologized to Bronco Mendenhall and told him he wanted to stay with the program and re-prove himself. With his performance in the Poinsettia Bowl on Thursday evening, Van Noy has proven everything. For three years Van Noy has tormented quarterbacks, running backs, and offensive coordinators with his athleticism, speed, and often freakish abilities to blow up the backfield, but he has never taken over a game the way he did in leading BYU to a 23-7 victory over San Diego State. For that matter, I don’t know that any single defensive player has single-handledy won a game for his team the way Van Noy did.

For three quarters the game was a total dud. Cody Hoffman, who was selected as the game’s offensive MVP, was the lone bright spot for the Cougar offense, racking up his 8th 100-yard receiving game of the season. But even Hoffman struggled, bobbling a Lark pass at the goal line that was intercepted. Jamaal Williams was unable to get anything going running the ball and James Lark, in his second consecutive start, struggled to beat the strong SDSU rush and complete passes with the accuracy and touch that he did against the admittedly weak New Mexico State defense in his previous start. Entering the 4th quarter, only three field goals were displayed on the scoreboard at Qualcomm Stadium as SDSU held a 6-3 lead. SDSU had moved the ball effectively throughout the first three quarters, led by running back Adam Muema’s 103 yards rushing, but the Cougar defense had succeeded in keeping them out of the endzone. The inept Cougar offense to that point made many wonder if the 6-3 lead may just hold for the Aztecs. That’s when Van Noy took over.

The unsung hero of the game had to be BYU’s All-American punter, Riley Stephenson who six times pinned the Aztecs inside their own 10 yard line. Following another fantastic Stephenson punt, Aztec QB Adam Dingwell dropped back from his own three yard line. Van Noy made a quick move around the outside and hit the ball out of Dingwell’s hand, just as his arm was beginning to move forward. Van Noy covered the ball for the first TD of the game, a play that would be reviewed and upheld.

The momentum changed quickly from that point. Dingwell fumbled on the Aztec’s next play and Jamaal Williams rushed it in from 14 yards out on the next play to give BYU a 16-6 advantage.

After the Aztecs and Cougars traded punts, Van Noy picked off a Dingwell pass on the left sideline. After a nifty return crossing back across the field Van Noy scored his second touchdown of the game, giving the Cougars their final score. The Aztecs were defeated mentally by this point and the game ended at 23-6.

Van Noy single-handledly took over the game for BYU. In addition to the two TDs, he also had a blocked punt, 3.5 tackles for loss, and 8 total tackles. The way Coach Mendenhall built this defense was truly remarkable. BYU will end the season with a top-5 defense for the first time in school history. As good as Ziggy Ansah, Brandon Ogletree, Bronson Kaufusi, Spencer Hadley, and others played this year, it was Van Noy that was the leader, the heartbeat, and the life of the defense game after game. While nothing would make this Cougar happier than to have Van Noy return for his senior season, there’s nothing he has left to prove to me in Provo. Onwards and upwards, Kyle, wherever you may play.