Lately, as in, for the last six seasons, BYU fans have become accustomed to winning the season opener. That includes, of course, the improbable victory over then-ranked #3 Oklahoma to begin the 2009 season. So it is no small thing to say that the loss to Virginia on Saturday came as somewhat of a surprise to Cougar Nation. 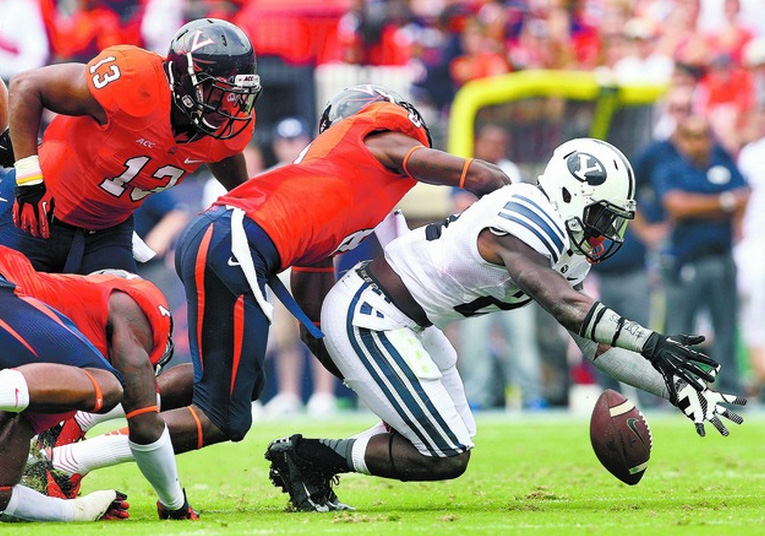 Unfortunately, early season adversity (read, “losses”) have come to be routine for Bronco Mendenhall’s club, even if opening week losses are typically not. Since Mendenhall took over for he-who-must-not-be-named as head coach in 2005, the Cougars have had at least two losses in the first four games in six of eight years. This does not always turn into a bad season, as evidenced by 2006, 2007, and 2011, when the team achieved 10+ wins despite having two early-season losses.

The key to this season lies in what lessons are to be learned from the loss at Virginia. Will it galvanize the Cougars and strengthen them for the rest of the season? Or will it divide players, coaches, and units in a way that leads to a disaster like 2010? The 2013 season is loaded with talented opponents like Notre Dame, Wisconsin, and Texas, and there isn’t a November full of WAC teams to rescue a bad season, so which direction the Cougars take after this loss will become apparent soon enough.

Here’s a look at what lessons BYU needs to take away from this loss at Virginia:

Offensive Line. The offensive line has left me longing for the days when we would have a pair of Reynolds brothers anchoring it. This was absolutely the worst unit on the field for the Cougars on Saturday, and must shoulder at least as much responsibility for the loss as Taysom Hill himself. The O-line allowed three sacks (the Cougar defense was unable to register even one), Hill was frequently forced to scramble or throw the ball away, and a great number of run plays were stuffed at the line of scrimmage or in the backfield. All of these are symptoms of an offensive line that is being overrun by the defense.

Taysom Hill. Hill has many excuses to draw on for a poor performance, including, but not limited to: lack of protection by the O-line, the absence of Cody Hoffman, the nasty, nasty weather, and the sometimes ridiculous playcalling. In the end, Hill’s performance was one of the worst of the opening weekend, and the worst by any Cougar QB in years, all excuses notwithstanding.

Dr. Anae’s Stubbornness.  More than a few people raised an eyebrow at the rehiring of Robert Anae, but most fans have been somewhere between intrigued and excited about his new, Rich-Rod inspired up-tempo offense. The relentless, speedy offense has been picked up by a few teams around the country over the last several years, perhaps most notably by Oregon. It becomes successful by wearing out defenses and allowing potent offenses many more plays per game, which leads to many additional yards and points. Unfortunately, when offenses are not executing, it just means the other team gets the ball back all that much faster.

The new offense was absolutely shining in the middle of the 4th quarter when Taysom Hill led the Cougars on an 11-play 92-yard touchdown drive in just over two minutes. The lesson Dr. Anae most needs to take away from this game is when to let off the gas. When you have the lead and there are fewer than four minutes left in the game, you stop running your up-tempo offense. And even if you don’t, you sure as hell don’t pass the ball on third down; regardless of the yards needed. You run the clock, whether you’re running an up-tempo offense or not.

The Cavaliers won a game they had no business winning, and after coming off a 4-8 season last year, they should be grateful any time that happens. Next week they will be hosting #3 Oregon, who will show them the true power of a fully-operational up-tempo offense.

There were plenty of negatives and a few positives to take away from the Cougars’ loss to the Cavaliers. What we know right now is that they’ve lost a game to a mediocre BCS team, and next week they will face a top-tier BCS team as they host the Texas Longhorns. How the Cougars react next week will tell us much more about who they will be for the rest of the year.